Can the Giants have a winning season in 2019?   You Bettcha!   It all depends on the performance of James Bettcher’s defense.

In Giants’ lore,  they have been known for having suffocating defenses.  We hope the 2019 defense can continue the tradition.   With a year under his belt and new chess pieces,  clever defensive coordinator James Bettcher can make necessary improvements to get the Giants back on track.  Last year,  the Giants finished 23rd in overall defense allowing 26 points per game.   His defense played tough and never gave up but the Giants did not have a guy or guys who could get pressure on opposing quarterbacks.  So the concern going into the off season,  the Giants have to draft a premier pass rusher.   Although the Giants passed on elite edge rusher Josh Allen in April’s NFL Draft, I think Bettcher will come up with creative ways to get to the quarterback.   As mentioned on April 29th post,  the Giants acquired defensive backs to bolster the back end of their defense.   And as witnessed in SB 53,  the Patriots ranked same as the Giants 30th in the NFL in sacks,  were able to generate pressure and confuse Rams QB Jared Goff.   What did the Patriots do which Bettcher will most likely include in his defense?   Well for starters,  the Giants drafted another defensive tackle and not a defensive end.  For the third consecutive draft, the Giants have stockpiled defensive tackles.  In 2017,  they nabbed Dalvin Tomlinson.  In 2018:  BJ Hill and RJ McIntosh.  2019:  Dexter Lawrence.    In order to slow down the Rams high powered offense,  the Patriots used a six man defensive line.

With all these defensive tackles, the acquisitions of safeties Jabrill  Peppers and Antoine Bethea, and outside linebacker Markus Golden. clearly,  Bettcher has better players to improve his unit.  Undoubtedly,  the NFL is a copycat league.  I am convinced Bettcher will use this six man defensive front as part of his defensive package.  Look below on how this strategy worked.  The Ringer.com did an excellent job of breaking down the brilliance of Bill Belichick.  If you recall,  in Super Bowl XXV,  Belichick used a 5 man defensive front to slow down the potent Buffalo Bills offense.

As the Rams built the most productive rushing offense in football, one of their biggest strengths this season was how smoothly their offensive linemen got to second-level defenders. No team did a better job scheming ways to quickly and consistently get its linemen onto linebackers. To combat that, New England removed its second level of defenders. In traditional rushing situations, the Patriots countered with a six-man defensive line. They played with four down linemen (which consisted of a rotation featuring seven different players who saw at least 10 snaps), with safety-linebacker hybrid Patrick Chung playing on one end of the line of scrimmage and Kyle Van Noy on the other. By crowding the line and occupying each of the Rams’ offensive linemen, the Pats created plenty of traffic and opportunities for their guys to win one-on-one matchups.

Most defenses combat the Rams’ brutally efficient ground game by sending their linebackers screaming after Todd Gurley on the back’s first movement. But because McVay loves to use play-action, that approach can leave defenses vulnerable. Rather than have inside linebacker Dont’a Hightower head downhill at the first sign of run action, Belichick and Flores instructed Hightower to react to the run in a more controlled way; he stuck to the middle of the field, which slowed play and allowed him to maintain his coverage responsibilities on play-action throws. That hesitation was possible only because the Patriots had devoted so many bodies to their defensive front.

Once Again, Belichick and Brady Bend the NFL to Their Will

Why We Love to Hate the Patriots

The Winners and Losers of Super Bowl LIII

3. Along with having Hightower stay put more often than usual, the Patriots used a collection of zone defenses that occupied the middle of the field and forced Goff to make pinpoint throws. New England used man coverage on a higher percentage of its defensive snaps than any team in football this season, but that didn’t matter Sunday. For Belichick, each game might as well happen in a different dimension. The Patriots played a variety of zone concepts throughout the game, and many featured a “buzz” defender—a safety who comes into the box and roams the middle of the defense. Belichick and Flores also upped the difficulty by starting that lurking defender from various spots. Sometimes, that would be Chung walking up from a deep safety on the back end. Other times, safety Devin McCourty would start near the line of scrimmage and bail at the snap, like he did on a tipped throw from Goff midway through the first quarter that might have been intercepted if it hadn’t been knocked down. The Patriots did an excellent job disguising their coverages and forcing Goff to process most of his information after the ball was snapped. That led to slow release times and confusion, and New England used that hesitation to its advantage with a bevy of line stunts and games up front.

4. Without a stable of dominant traditional pass rushers, the Pats manufacture pressure through their scheme, and they pulled that off beautifully during this season’s playoffs. On the Rams’ first obvious passing down of the game—a third-and-8 from their own 29-yard line—McVay’s offense lined up in shotgun with three receivers to the right and tight end Gerald Everett as the lone receiver wide to the left. New England responded with a four-man front that featured Hightower as a stand-up defensive end and Adrian Clayborn aligned as a 3-technique tackle, both to the right side. With fellow defensive tackle Malcom Brown aligned head-up on the center, the Rams should have anticipated some type of game between Clayborn and Brown, but they didn’t. The pair executed a quick twist stunt that got Clayborn loose as a free rusher, and, as Goff released a throw to receiver Josh Reynolds, he was hammered by the 280-pound lineman. It was the first shot Goff took Sunday, but it was far from the last. New England hit the Rams quarterback 12 times, and, like Clayborn’s lick, many of them were flush. 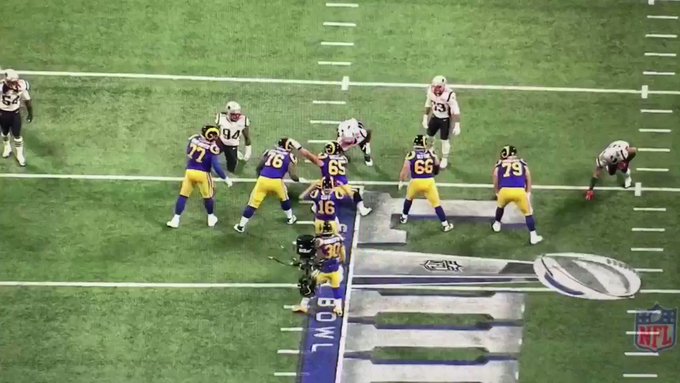 Watching film on the #Patriots 3rd down defense in #SBLIII. Physical from the start. Clayborn gets home on the stunt — with man-coverage in the secondary. @NFLMatchup

Like the Patriots, the Giants do not have dominant pass rushers.

5. The second half of the Pats’ pass-rush plan was to regularly send five or six defenders on obvious passing downs. New England’s blitz-happy ways led to a pair of massive moments. One of those came from Duron Harmon, the reserve safety forced into a larger role when Chung left the game in the second half with a broken arm. In the moment, Ringer colleague Kevin Clark and I joked that Harmon would almost certainly become one of the largely unknown heroes for another Patriots championship team, and, sure enough, that happened late in the fourth quarter. One play after helping break up a would-be Rams touchdown to Brandin Cooks, Harmon lined up in the box. At the snap, he blitzed as part of a Cover Zero pressure designed to force a quick—and bad—decision by Goff. With Harmon bearing down, Goff floated a pass to Cooks that was easily intercepted by Stephon Gilmore. Just like that, the game was ostensibly over.

The other massive moment came courtesy of Hightower, who continues to show up at the most crucial moments. On a third-and-7 late in the third quarter, the Rams lined up in a shotgun formation with Hightower as a stand-up linebacker situated on the outside shoulder of guard Austin Blythe. With fellow linebacker Kyle Van Noy also threatening as a blitzer, the Patriots had five rushers against the Rams’ five offensive linemen, which ensured single blocks for each one of their defenders. At the snap, Hightower hit a quick inside move against Blythe, broke into the backfield, and pulled down Goff for a 9-yard loss. The sack came one drive after a third-down pressure from Hightower forced Goff into an incompletion from his own 6-yard line. On that play, Hightower was lined up as a defensive end on the left side, and there was nothing complicated about his path into the backfield. He simply beat Rob Havenstein—one of the league’s top tackles—with excellent hand usage on a power move.

The do-it-all linebacker missed last year’s Super Bowl with a pectoral injury, and his performance against the Rams was a reminder of just how vital he is to the Pats’ defensive versatility. There just aren’t many players who can adeptly fill both an off-ball linebacker role in running situations and that of pass rusher on throwing downs. The key to New England’s plan on defense is how many different ways it can use certain players, and Hightower epitomizes that philosophy. The Patriots’ ability to unearth playoff performances like this—surprising ones from their lesser-known players and consistently excellent ones from their key contributors—is the reason they’re in this position every year. And it’s the reason, no matter how much the roster turns over, they’ll be here until Belichick decides he’s done.

Because the Giants were bereft of talent on the defensive side of the ball,  Bettcher blitzed 26 percent of the time as compared to his years in Arizona in which it was much higher-33 to 45 percent of defensive snaps.  I expect this number to rise significantly in 2019.

Despite the lack of talent on defense,  I continue to point out the Giants were a PLUS 2 overall in turnover differential.   His defense scored THREE touchdowns.  I expect these numbers to improve this upcoming season.

Passing offense is king.  If a defense can slow down or snarl an opposing team’s pass offense, it gives its team a better chance of winning.  Based on analytics,  passing efficiency predicts the winner to much greater extent than rushing efficiency.

If the Giants are going to have a winning season in 2019, James Bettcher’s defense is going to get them over the hump.