In the most important preseason game of the year, the Giants took care of business against the pathetic Jets. Big Blue overwhelmed the Jets, taking a 29-3 lead at the half. Although the final score was a one-point win for the Giants, the major takeaway is the Giants defense. It is going to be a force this upcoming season. One of the components is Landon Collins. 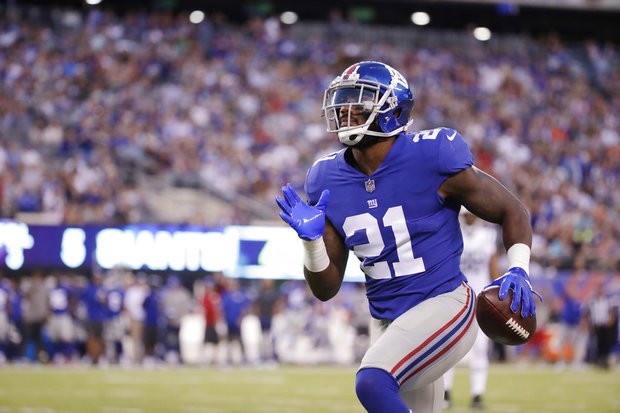 The third year pro continues to shine. Last year, he had an outstanding season, and he is still getting better, especially his ball skills. On the interception that he returned for a touchdown, Collins recognized the coverage, jumped the route and scored a touchdown. As we have said, Collins is a solid player whom Spags has used masterfully as a quasi linebacker. He can tackle well and guard against the short pass. His only deficiency is guarding receivers on deep balls. As the Giants play quarterbacks who can throw deep, i.e. Carson Wentz and Jameis Winston, we shall see if he has elevated his game in this area. If he does improve on deep coverage, he will become the best safety in the NFL.

JPP looked athletic and appears to have regained his 2011 form. He was flying around the field. The major question mark with him is endurance. As we mentioned, the 2016 Giants were 8-3 with JPP in the lineup. When he got injured and did not play, the Giants posted a 3-3 mark. It is my opinion, if the Giants are going to get to the Super Bowl, they must have a healthy and dominate JPP.   On the other hand, it was against the Jets with fringe quarterback Hackenberg. It was good to see JPP play well, but we have to take the shoddy play of a young quarterback into consideration. In the first quarter, JPP sacked Hackenberg for a safety. This gave the Giants their first points of the game.

As for the offense, Eli should have taken the sack instead of throwing the ball up for grabs, which resulted in an interception. One of Eli’s major drawbacks is his mental lapses. At this point in his career, it is inexcusable for him to make this type of error. More importantly, if the Giants continue to struggle on offense, their margin of victory in each game will narrow. He has to minimimze or eliminate errors which can cost the Giants games. What happened on this play?

Usual suspect lineman John Jerry allowed a rusher to get to our franchise quarterback. After this series, Jerry was replaced by Brett Jones. As for Eli’s passes, most of his completions came on crossing or seam routes. There was one rail route in which Sterling Shepard made a beautiful catch. It is becoming apparent, as we mentioned in our previous post, Eli Manning’s lack of arm strength is a major concern. He does not drive the ball deep. My take is opposing teams are aware of this. They are going to clamp down on the short passing game and dare Eli to throw the deep ball.

Of the 29 Points scored in the first half, the Giants offense scored one touchdown. This is disconcerting. In this game, the Giants did not have OBJ and Brandon Marshall in the lineup. Even with both starting receivers out, the Giants should have scored more touchdowns. It is my belief, McAdoo is still adjusting from offensive coordinator to head coach. The same parallel can be made when Jim Fassel took over as Giants head coach. Like Fassel, McAdoo is an offensive mastermind. In Fassel’s first three years, the Giants were not an offensive juggernaut. They won with defense. It sure looks like the same thing is happening with McAdoo. Despite having invested a lot on offensive weapons, the Giants are going to win in 2017 with stellar defense not offense.

Following up from last week’s game vs Cleveland.  Was the hit on our star receiver OBJ “dirty”?

Here is my colleague Pete’s take:

The hit wasn’t inappropriate at all. The rules are so screwed up.  For example, a player can’t hit high, you can’t hit too low, but this was unintentional, not dirty. The Browns guy actually was falling forward when he hit OBJ. Football is a contact sport and when there is no intention to cause harm no penalty exists. This was not a foul and the Giants did not complain. As for OBJ, he was NOT hurt other than a sprained ankle, which is impossible to predict and nothing illegal about it.

McAdoo has to make a decision on a kicker. Both veteran Mike Nugent and rookie Aldrick Rosas have performed very well. It is going to be difficult to choose. Does McAdoo select the rookie over the seasoned veteran?  Rosas has a strong leg, but can he handle the pressure? Recall when Fassel made the decision to give Matt Bryant the job back in 2002?  But when the playoff game was on the line, Bryant missed a crucial 47-yard field goal against the 49ers. His miss allowed the 49ers to make their amazing comeback. This is something McAdoo has to take into consideration.

With OBJ and Marshall sidelined with injuries, rookie wide receiver Travis Rudolph made a positive impression in this game. He had three catches for 81 yards. The undrafted free agent did make an impression. It was not as dramatic as Victor Cruz’s coming out party vs the Jets in 2010, but it was good to see players who are undrafted make significant contributions to the team. I am rooting for Rudolph to make a roster spot.

The Giants lack of a quality offensive line may be their undoing this season. If the line cannot create some semblance of a running game or has problems with pass protection, it is going to be a long season.

Reese miscalculated with the running back situation. Orleans Dwarka, Paul Perkins, Wayne Gallman, and oft-injured Shane Vereen are not going to scare opposing defenses. So far this preseason, none of them has made an impact.

After watching Geno Smith, Josh Johnson and Davis Webb, it’s clear we do not have a quality back-up quarterback. If Eli gets injured, the Giants are doomed.